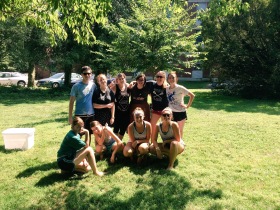 Today marks the end of The Elm’s bootcamp! After a long week of workshops and writing the editors, along with the staff of the Collegian, relieved some stress with a water ballon fight! The Elm staff took on the Collegian for a fight that seemed to last forever. 600 water filled balloons later both teams were soaked and pretty tired. Hopefully this won’t be the last water ballon fight of the year because everyone had a blast!