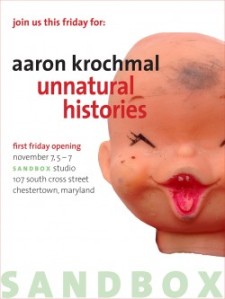 Friday evening, Doctor Krochmal and assistance professor of studio arts, Heather Harvey gave an insightful talk about how art and science influence one another. The talk took place in the studio art center, which really added to the atmosphere of the talk. By being in the art studio one felt like an artist and could experience the space in which an artist works. This event was produced by Sandbox, a unique art gallery in Chestertown, whose mission is to bring art and science together. Dr. Krochmal began the talk by explaining what he does and how he does it. From a young age he wanted to be a natural historian and he gave many examples of scientists and how they acted as natural historians. The key to this was to just look! Look and write down everything one sees, take notes, and draw or take pictures. Dr. Krochmal argues that this element of recording everything you see is like being an artist. Scientists must have the ability to “see” whatever they are looking at objectively. They must notice everything down to the smallest detail. That is why, Dr. Krochmal argues, a scientist must think like an artist. Observation, description, and experimentation are the main steps scientists take; the first two steps use a lot of art. Dr. Krochmal looks at nature and tries to understand it, but what happens when unnatural things are found in nature? Dr. Krochmal doesn’t just ignore it; it is his job to make an observation and write a description. These man made things, like toys, trash, and clothing have become a part of nature and it’s Dr. Krochmal’s job to tell the story.

After Dr. Krochmal was done, Heather Harvey gave her talk. Harvey, assistance professor of studio arts, was an archeologist who turned to art because she saw beauty in things and wanted to invent instead of following rules. Through her art she expresses feelings and ideas. By using science, Harvey makes her art unique and meaningful. With some of her projects she attempts to make art coexist within nature. Harvey has used scientific data to make her sculptures, which connects her work with nature. A recent project Harvey is working on is to collect man made things she finds outside when she goes on walks. With the objects she finds, Harvey makes a type of collage. Like Dr. Krochmal, she also finds unnatural things in nature. However, each is making his and her own story. Dr. Krochmal observes and describes what he finds, and Harvey uses what she finds to make a story. Each of these methods requires the use of art and science. One cannot be had without the other. This talk was very eye opening and made one really think about the relationship of art and science. Two seemingly different areas of study have so much in common and are impossible without the other. With the right mix of art and science many different things can be accomplished. So next time you look at a piece of art or go to science class try finding the relationship between art and science.