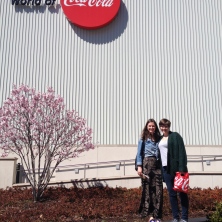 Kayla and I started off the day late because we had driven over eleven hours the day before. We deserved a night of hibernation. Our first stop was Centennial Olympic Park with a relaxing morning stroll. It was nice to see all the locals on Saturday morning taking their dogs on a walk or jogging from fountain to fountain. It also helped that the weather was amazing, about 20 degrees warmer than Maryland, where I came from. We admired the beautiful statues and the dancing flags of the countries present at the 1996 (I think?) Olympics in Atlanta.

Following the park we headed to the tourist trap, Coca-Cola World and I’ve gotta say… worth every penny. I’m one who prides myself in avoiding being a tourist but when you’re only in a city for one day you kinda have to be that girl. Yes I took pictures by the coke sign and I’m proud! The factory tour cost less than $20 and you get endless amounts of coke products from all over the world. All of the exhibits focused on different aspects of Coca-Cola and my favorite was definitely the tasting room. Every continent had it’s own tasting section so of course I went straight to the Africa area. It really brought me back to my times in Tanzania with especially the pineapple Fanta and Stoney Tangawizi ginger beer. Atthe end of the door they send you home with one of those adorable mini coke glass bottles. It was an engaging and unexpectedly fun tour.

Afterwards, we roamed around a little bit, taking photos of everything and soaking up every last ounce of sunlight. We toured around downtown enjoying the beautiful city. Once we tired out downtown we headed to Atlantic Station for some shopping. The whole Atlantic Station square is really cutesy and welcoming. There are some great shops and it’s basically just an outdoor mall. Atlantic Station also features the great Bodies exhibit, which I had seen previously so I didn’t feel the need to stop there, but Ido highly recommend it!

Following some quick shopping we headed about thirty minutes outside of the city for Stone Mountain, which turned out to be the biggest bust of the day. We were really excited for this as it was really the only thing we planned, but I guess not as well as we thought. Turns out the tickets for entry are almost $30 each plus $10 parking – we thought it was more of a park thing with just $10 parking. Huge bummer for two broke college students. After we paid for parking and discovered the ticket cost we said hell to the no and decided instead to just sit on some decorative rocks in the parking lot and enjoy the weather. Plus save the sixty dollars between the two of us for a night stay in a shitty motel. After snapping some photos of the carving in the mountain, which is actually of confederate soldiers (woooo?) we headed back on the road towards Huntsville, Alabama.